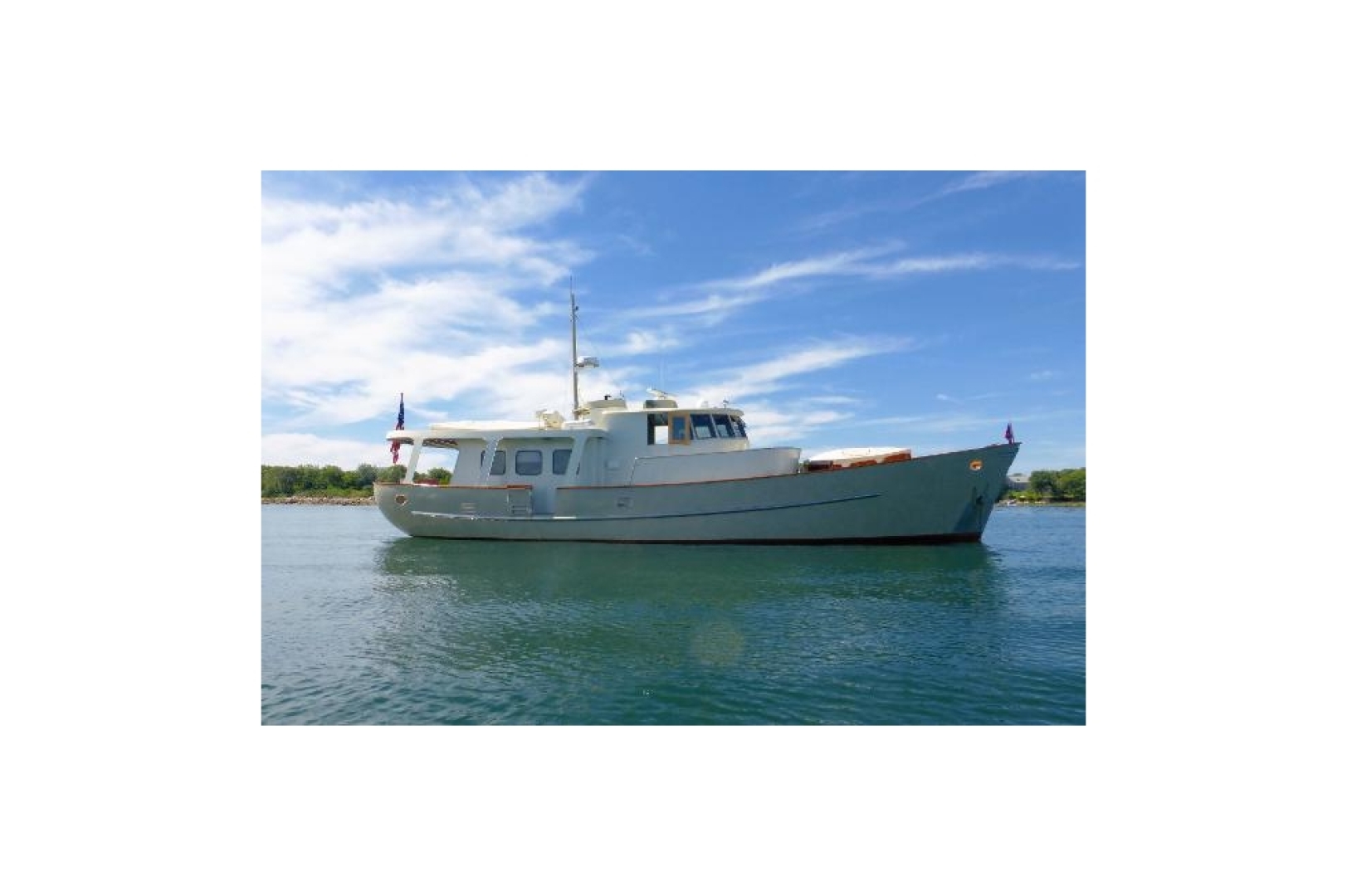 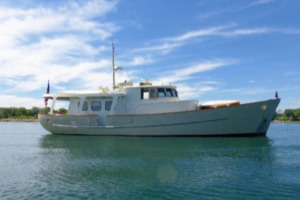 The owners of MIGRANT have completed their waterfront renovation and have "moved ashore".... MIGRANT is very much for sale, an incredible value for those that look for the safety and the heft of a steel yacht, and the feel and conveniences of a home afloat.

The owners of MIGRANT have completed their waterfront renovation and have "moved ashore".... MIGRANT is very much for sale, an incredible value for those that look for the safety and the heft of a steel yacht, and the feel and conveniences of a home afloat.

MIGRANT is a liveaboard trawler, truly a small ship: she was built in Corten steel by the Cammenga yard in Holland in 1967.

Rebuilt, upgraded and modernized by her current owners in 2005, she has cruised extensively, including the Med, safely and in comfort. With one large owners cabin, a small guest cabin/office, nicely appointed home-style galley and head, MIGRANT is indeed a go-anywhere comfortable home afloat.

Her Gardiner 6-cylinder diesel is an engine legendary throughout the world, offering a comfortable 8-9 knot cruise. At 8.5 knots cruise, with a consumption of 3.5 gph, she has a range of over 2000 miles.


Joel Dionne Yachts is pleased to assist you in the purchase of this vessel. This boat is centrally listed by East Coast Yacht Sales. It is offered as a convenience by this broker/dealer to its clients and is not intended to convey direct representation of a particular vessel 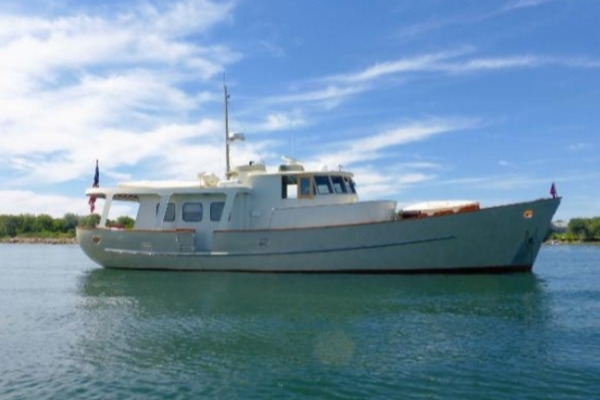 MIGRANT was bought by her present owners in 2005 as a well-built "but needing repairs" Cammenga 61 steel trawler with the intent of doing extensive cruising as a couple. She was taken from the Chesapeake to Padanaram MA and then on to Lunenburg Nova Scotia. She underwent a total interior refit while at the Lunenburg Foundry.

Her owners managed the project, living in Lunenburg for the duration of the project. As described by her owners: The entire interior was removed, down to bare steel, with the exception of the engine room. Inside, the forward end of the underfloor fuel tanks showed corrosion, and both were shortened. Most of the steel freshwater tank was removed and replaced with a new stainless steel tank (about 400 gallons). The forward part of the old freshwater tank was made into a gray water tank, and the old gray water tank was converted to a blackwater tank.

In the engine room the insulation was removed and replaced. The generator was relocated from the lazarette to the port aft are in the engine room. Nothing was done to the Gardiner main engine, which runs flawlessly. All small componenets, filters, pumps etc were removed and overhauled or replaced as necessary. On the outside, the old teak decks were removed, exposing a fair amount of wasted steel decking. Virtually all the main decks were replaced including anchor windlass platform, and repairs to steel work made as needed. Any steel that was more than 10% wasted was replaced, including a very small portion of the hull. Pilot house to deck interface and stack-to-house interface were placed. The hull rubrail was found to be deteriorated rubber and was replaced with half-round stainless steel. Rail cap was removed and replaced with new steel flange, and a new teak caprail was installed when she returned to her home at the Fairhaven Shipyard. The teak main deck was fabricated and installed by TDS in 2006. No mechanical fastening and no bungs.

The interior was designed to be a comfortable home for two, with a guest cabin. The galley had to have "the comforts of home", as did the bathroom/head with large shower, home-size washer/ dryer etc. After sandblasting, all steel was painted and all exterior surfaces insulated. Extra insulation, SoundDown insulation and cork was used on the bulkhead between the engine room and living spaces. Cork was installed between the two layers of subflooring. All interior members were epoxy-coated (3 coats) after fitting and before installation.

All electrical and plumbing is new. Glass in all the windows was replaced. The skylights and stainless steel opening ports are new. Interior woods are native North American Cherry, with Ash overhead beams. Wall coverings are vinyl. Extensive documentation and photographs of the refit work are available. Interested buyers may contact listing broker for additional online photos in higher resolution.

Since her refit, MIGRANT has travelled extensively, including 7 summers cruising the Med (shipped across the Atlantic as deck cargo). She is comfortable, capable and ready to go much farther.... MIGRANT holds a USCG Certificate of Documentation.

Coming aboard there is a gate to the main deck on the starboard side. Double cherry doors open from the covered aft deck into the salon. Down and to starboard are steps to the galley, which is along the starboard side. The owners' cabin is large and spacious, all the way forward. Going aft to port is the bathroom (the word Head doesn't do justice!) with a full house-size shower, vanity and marine toilet. House size washer and dryer are in the head. Athwartship is an office/guest cabin with over and under berths. From the salon there are steps up to the pilothouse, which has Dutch doors P&S to access the side and main decks. Fully airconditioned, with reverse-cycle heat.

MIGRANT has full walkarounds from forward to aft. Decks are under cover from the fantail to amidships. Access to pilothouse doors P&S and to the portuguese bridge is up steps from the side decks. Access to boat deck is via stainless ladder behind port pilothouse door. • Teak decks installed 2006 by Teak Decking Systems: teak with no bungs, thiokol seams • Stainless steel cleats, stainless-lined oversize hawses for docklines • Stainless rail cap, portuguese bridge • Stainless frame trim all around • Varnished teak caprail all around, blind fastened to new steel railcap, by Kelly's (Fairhaven Shipyard) 2007 ANCHOR PLATFORM • Electric anchor windlass with dual chain gypsies and top capstan. Chain gypsies individually clutched and braked. Motor rebuilt 2007. Gear box inspected 2005. • Two Poolanker anchors, 250# and 175#, each with 250' of 1/2" galvanized chain, in hawspipes P&S, self stowing.

Engine and generator hours are as of the date of the original listing and are a representation of what the listing broker is told by the owner and/or actual reading of the engine hour meters. The broker cannot guarantee the true hours. It is the responsibility of the purchaser and/or his agent to verify engine hours, warranties implied or otherwise and major overhauls as well as all other representations noted on the listing brochure.

The company offers the details of this vessel in good faith but cannot guarantee or warrant the accuracy of this information nor warrant the condition of the vessel. A buyer should instruct his agents, or his surveyors, to investigate such details as the buyer desires validated. This vessel is offered subject to prior sale, price change or withdrawal without notice.